MADAME is out on DVD in France. A beautiful object, manufactured and distributed by Outplay!

MADAME is airing on Swiss National Television RTS2 on Sunday, February 14 at 22h05.

MADAME available wordwide from January 15 until February 15, 2021 on

Thanks to SWISS FILMS, UniFrance and my world sales agency Lightdox!

MADAME selected for the new education program VISIONS DU REEL AT SCHOOL, offering the film to classes for free in Switzerland, along with an educational kit to address homophobia and sexism at school.

Madame will celebrate its Israeli premiere in official selection at TLVFest in Tel Aviv!

Madame will celebrate its UK premiere in official selection at Raindance Festival in London!

Madame will celebrate its Austrian Premiere at the Festival du Film Francophone in Vienna!

The editor Natali Barrey is nominated for Best Editing at the most prestigious Film Editing Festival in Germany EDIMOTION for MADAME! Congratulations, well deserved!

Screening on September 10 at 6:20pm, hosted by my friend filmmaker and LGBT activist Romas Zabarauskas

MADAME selected at Festival IN&OUT in Nice, Cannes and Toulon!

AMAZING REVIEWS IN THE FRENCH MEDIA!

“A grace and a tenderness that go straight to the heart.” Le Monde

“Overwhelming by its sobriety and sincerity.” Le Nouvel Obs

“Beautiful and moving like when you hug someone you love.” 20 Minutes

“A documentary love-letter to a high-powered grandma. Reality-TV before its time. A deeply personal film.” France TV Info

“Stéphane Riethauser exposes himself to challenge gender issue, to flinch us, to implicate us. A movie film about two people who emancipated from male domination.” L’Humanité

“What if the best stories were our own? What if the biggest adventure was just trying to be oneself? A heart-rending, political home-movie, Madame shows us the fabrication of an identity through the prism of a family, its hidden corners, its tacit rules and its orderly celebrations.” Têtu Magazine

“The strength of Madame is to link the intimate with the political, mirroring our collective experience, without demonizing it, only striving to understand. It is without a doubt a message of public interest: Madame gives hope, reminding us that human beings are not determined but free to change and to love.” Le Bleu du Miroir

“You are moved. You laugh, you cry. A pure masterpiece.” Fou de Théâtre

“Woven with moving archives material, lifted by a romantic fluidity and a captivating soundtrack, the film permanently changes the tone. We laugh, we cry. Magic of the editing, or delicacy of the glance? Even the painful moments are told with tenderness.” Arthur Dreyfus, Magazine ArtPassions

“Everybody will find something particular in this luminous story, whether about the construction of one’s sexual identity or about the relationship we have with our forebears. An enchanting film.” A voir à lire

“By subliming the anecdotic of what is shown, this biography immediately takes a universal dimension, without losing an intense subjectivity that goes straight to the heart. An exceptional documentary.” Bande à part

“A magnificent documentary about the difficulty to emancipate from the expectations of the others.” Les Ecrans Terribles

“A sincere work, full of humanity, touching the universal. A must see.” P.A.F. / Pop and Films

“A hymn to love, difference and self-acceptation.” Spoon of Moon

“An ode to freedom and independence.” Tribu Move

“Stéphane Riethauser offers a poignant, previously unseen perspective on internalized homophobia and sexism, and on the queer ways to get out of it.” Le Polyester

“A documentary that is more than necessary.” Zickma.fr

“A troubling, beautiful double portrait of a conservative young boy going through the difficult path of becoming a gay man and of the lady that was, even more than his own mother, the woman of his life.” Sens Critique

Premiere at Cinéma Majestic Bastille on Aug. 20 at 7pm.

Look at all the pictures of the premiere here!

Madame selected at 8° Panorama do Cinema Suíço in Brazil!

Watch the film online for free from Aug 31 to Sept 2 here.

Thanks to Swissfilms and to the Swiss Consulate in São Paulo.

MADAME in the Ukraine!

Followed by a Q&A with curator Bohdan Zhuk.

Thank you Swiss Films for their support.

Online screening Aug 25th, followed by a live conversation with curator Peter Machen, you can watch it here.

Thank you Swiss Films for their support.

“For its inventive use of music and archives in an intimate video diary that succeeds in breaking the boundaries of a boy’s personal confession/coming out to his grandmother to become a moving universal essay on the concepts of toxic masculinity, patriarchy, homophobia and femininity, as well as an act of reconciliation between the past and the present in a world that’s struggling to change.” (Jury)

MADAME released on DVD in Germany!

Available at your local bookstore (Prinz Eisenherz in Berlin) or at Mediamarkt, Saturn, etc.

MADAME released in VOD in Switzerland!

MADAME released in VOD in Germany!

MADAME opens on April 23, 2020 on VOD in Germany and Austria!
Exclusively at the Salzgeber Club!
Watch the movie for only 4,90 €!
(German version)

MADAME released in cinemas in France!

Madame nominated for Best Documentary at the Swiss Film Awards 2020!

Announced in Solothurn on January 23rd on the Nomination Night

Madame nominated for Audience Award at the 55. Solothurner Filmtage 2020!

Thank you so much!!

Madame selected at the 10th Ramdam Festival in Tournai!

Screenings in presence of the director:

Madame under the Florida sun

Madame in competition at the Dunedin International Film Festival.

Madame screens at the mythical Kinobar Prager Frühling in Leipzig during the Queer Filmwoche.

MADAME in cinemas in Germany!

– Berlin: as of Dec 12th, everyday at 6:30pm in at Kino FSK am Oraninenplatz in Kreuzberg (OV French with German subtitles)
–>Special: Sunday Dec 15th 18h30: Q&A with film team

Berlin Premiere of MADAME at MONGAY at Kino International on Dec 9, 2019. A dream has come true: to present my film in this mythical theatre! Thank you so much for attending, it was a memorable night!

MADAME screens at the Swiss Institute in Rome! 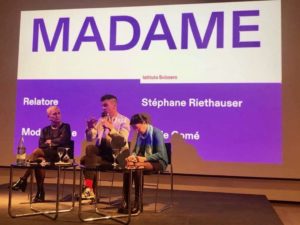 MADAME special screening at the Centre Culturel Suisse in Paris!

Followed by a panel discussion with the writer Arthur Dreyfus 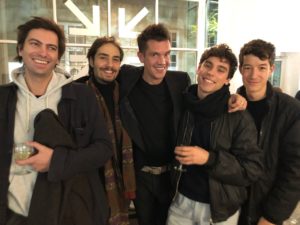 MADAME wins Jury Award and Audience Award for best documentary at the 32nd Festival Image+Nation Montréal! WOW! That makes it 7 awards! Thank you so much!

Pictures of the premiere in Taipei

MADAME celebrated its North American Premiere at America’s largest documentary film festival DOC NYC!
What a wonderful welcome, what a pleasure to see all these old friends I hadn’t seen in such a long time!

Pictures of the premiere in New York 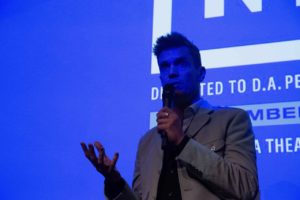 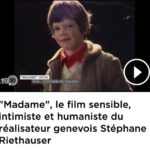 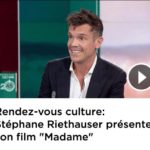 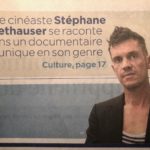 “A little miracle. A movie that keeps opening up to the world, that welcomes everyone in his lap.”  La Tribune de Genève 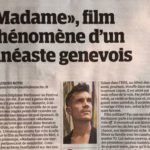 “A wonder of sensitivity and relevance.”  Le Matin Dimanche 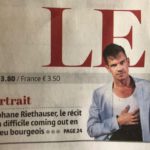 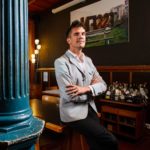 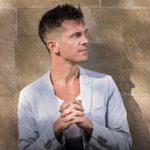 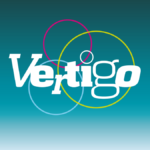 “A self-portrait without concession, of brutal honesty. An anthem to the conquest of freedom.”  La Liberté

“A movie that comes out of the beaten path and opens the minds.”  Daily Movies Magazine

“A fascinating self-portrait, a film that breaks taboos.”  Magazine 360

Madame opens in theatres in Switzerland!

MADAME is out in selected theatres in Switzerland!
Full house at Bio Cinema in Carouge in presence of Mrs. Ruth Dreifuss, former President of the Swiss Confederation for the Gala Premiere.
Thank you to the audience for this incredible warm welcome!

Pictures of Gala Premiere in Geneva

MADAME wins Jury Award and Audience Award at the Queer Festival in Porto!
RTP national TV will buy the film and show it!

After the awards received in Madrid and Buenos Aires, MADAME continues its world tour 2019. Here’s the program until November:

*Catch me in one of these cities, I will be there!

Tuesday October 22 at 8:30pm, Premiere at Cinema Bio in Carouge in presence of the film team and of Mrs. Ruth Dreifuss, former President of the Swiss Confederation, protagonist of the film.

Stéphane Riethauser will be present at all screenings listed here:

Also in Vevey at Cinérive Rex, in Château d’Oex Cinéma Eden, in Basel at Kino Atelier, in Aarau at Freier Film, etc.

All locations and schedules on Cineman.ch

MADAME in the magazine ArtPassions

Nice critique of MADAME by Arthur Dreyfus in the magazine ArtPassions / September 2019.

Stéphane Riethauser as guest on the radio show Queer Beets on Gayradio.ch to talk about Madame.

Listen to the interview (in German):

Screening Thursday September 19, 2019 at 6:25pm at the Central State Film Archive in Tirana.

MADAME goes to FFFH in Biel!

MADAME opens in Germany in 3 cities at the Queer Film Festival!

Madame conquiers the 72nd Locarno International Film Festival!
Laughs, tears and applause during the screening, in presence of Ruth Dreifuss, former President of the Swiss Confederation, protagonist of the film, and Alain Berset, member of the Federal Council, Head of the Federal Departement of Home Affairs.
Thank you to the sharp audience for this overwhelming warm welcome!

Madame is selected at the 72nd Locarno International Film Festival in the section Panorama Suisse!

MADAME in the Indian press!

Madame was screened in June 2019 at the Kerala International Film Festival, and the daily newspaper The Hindu talks about it.

Read the article of The Hindu

Happy to annouce the official selection of MADAME at the Kerala International Film Festival!

MADAME wins the International Competition Jury Prize at the 16th Festival Documenta Madrid! Thank you so much!

Look at the pictures here

MADAME selected in International Competition at the 16th Festival Documenta Madrid
Screenings Friday May 10 10pm, Thursday May 16 7:30pm at Cineteca Madrid, and Friday May 17 at 7:30 at Sala Equis.

«Disarmingly sincere, with a cathartic dose of good humor.
A moving documentary which gives voice to things unsaid.»
Cineuropa

The first 20 min. of the show are dedicated to MADAME

Additional screening
Sunday April 7th at 11:45 am
at Cinema Capitole Leone, Nyon
preceded by a “Morning Talks” session at the festival centre with the film team

All screenings open to the public
Get tickets